Below is a recording of the Woodlynne Borough Council Reorganization Meeting held on January 04, 2021. My apologies in advance for the wicked feedback that occurs during this recording. Please understand that this is being caused by too many people being too close together with open mics, and it is *not* coming from my side. The only modifications made to the audio was to boost the volume.

There are just a couple of things that I’d like to bring your attention to, while I still have it. The first of these is about nepotism. For those of you that don’t know, in a nutshell, nepotism is hiring people that you’re related to, particularly if this makes you their boss. Now within Woodlynne we seem to have problems with our Mayors (at least the last two) hiring relatives, and this is something that the Borough’s own handbook *explicitly* forbids: 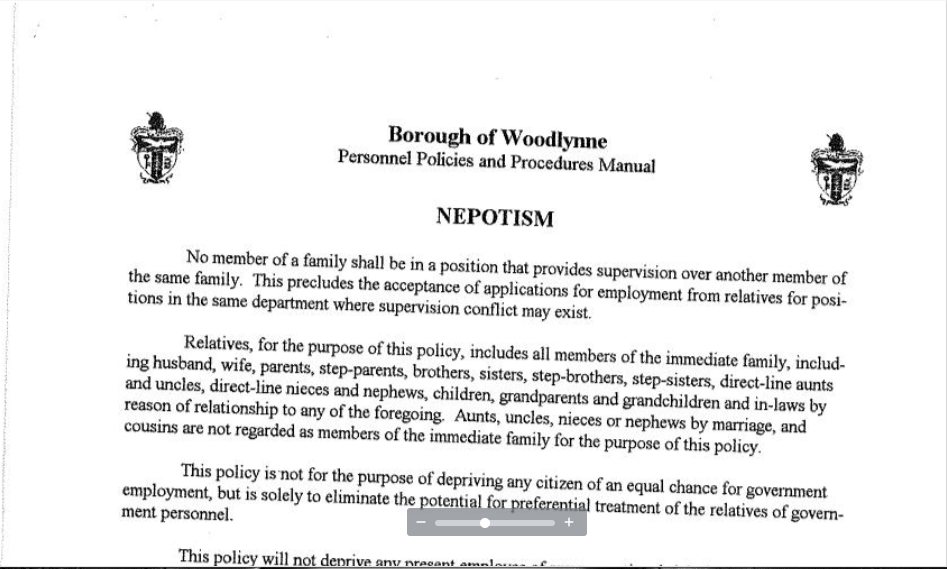 Mayor and Council tried to shrug this off by insisting that it doesn’t apply, since Mayor Chukwueke wouldn’t be his brother-in-law’s direct supervisor, but as you can see from the above, it says nothing about “direct” or “immediate” supervisors, and obviously the Mayor’s seat sits in a supervisory capacity to everyone that works for the Borough, so they are still violating this policy. Mayor Fuentes did the same thing with regards to his sister-in-law working for him.

The second thing that I would like to discuss is the Borough’s continued attempts to silence the public, by setting new resolutions to try and dictate how we are to behave. Now, while they are allowed to set restrictions, they are still required, as per the Open Public Meetings Act, to allow any and every member of the public speak, so any of these statements about how they can entertain a motion to adjourn at any time, and that it is always in order, is simply not true. These people do not have the authority to supersede the OPMA, and regardless of how late it might be, they are *required* to allow everyone speak that wishes to. It looks like they are also going to start charging a fee to the people that exercise their OPMA-guaranteed right to have the full meeting agenda prior to the meeting, except for members of the press, who they know full well aren’t likely to show up to one of these.

To that end, allow me to clear up some potential confusion with regards to this meeting. Near the end, we get to listen to the solicitor talking about profanity, and how it’s not acceptable, and how such things are supposedly the reasons why so many restrictions are being placed on the public. In this case, he was specifically referring to one resident saying that the governing body is a bunch of “assholes” in the Zoom chat. Let’s be perfectly clear: the OPMA protects our rights to speak at these meetings, and the governing body is prohibited from censoring it. Let’s also be clear here, “Asshole” is not profanity. It *is* vulgarity, but it is not profanity, and in fact if you want examples of profanity during these meetings, you only have to look to the Council President. How many times have residents heard her muttering things like “Jesus” into the mic. Now, I am not stating this for the purposes of getting into a debate regarding which usage is “worse”, but rather to point out that these people don’t actually know what they’re doing. The solicitor specifically stated “profanity”; you know that guy who’s supposed to be able to use his words to help protect the Borough. Admittedly, this may be a little nit-picky, but their hypocrisy is far from it, and this is how they try to justify it.

Finally, I’m going to close by mentioning the point at which the audio cuts here. Mayor Chukwueke decided to end the public, government meeting by leading a prayer, which is *not* ok. If he wants to lead a prayer, and the rest of Council wants to sit in on that, that is their prerogative, but they can do that *after* the meeting. He is by no means allowed to do this while he is presiding over a public meeting.